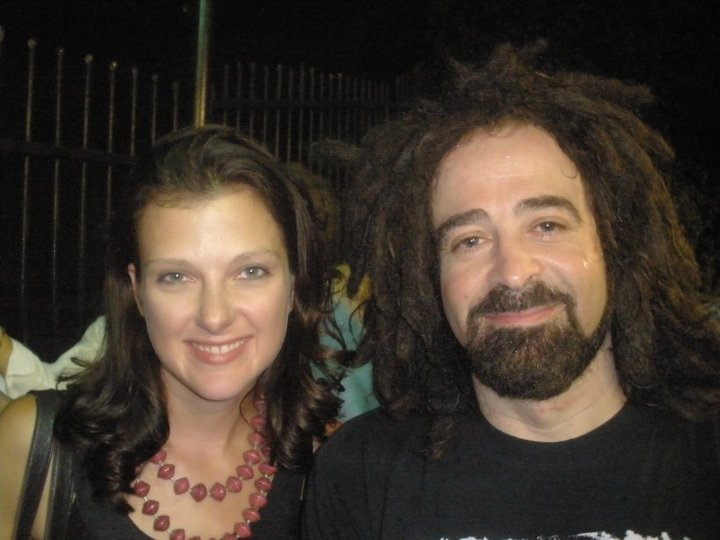 I am not sure if you caught the Super Bowl halftime show, but as I mention on Ep72, Katy Perry’s performance really inspired me. I was blinking back tears as she rode off on that ”The More You Know” star. But then again, music has always moved me. Songs usually make me cry out of inspiration, joy or sadness. The pure emotion it takes a person to create music along with the raw drive it requires to keep putting it out in the world simply blows me away.

I had been a dancer since I was three years old. My first memory of music was Frankie Valli and the Four Seasons. I can remember dancing around my bedroom to “Rag Doll” and “Big Girls Don’t Cry.” Next came Billy Joel and his River of Dreams album. “In the Middle of the Night” made my heart soar. Then, I heard Counting Crows. From “Mr. Jones” to “Anna Begins” to “Raining in Baltimore,” and that was just the August and Everything After Album. They are still my favorite band to this day.

I knew one day that I would meet Counting Crows frontman, Adam Duritz.

ADAM, late 30’s, brilliant musician, sits alone at a table writing a song. The main door opens. Adam looks up to see NATALIE, early 20’s, a beautiful Jersey Girl walk through the door. Natalie saunters up to the counter. Adam strolls over to the counter and taps her on the shoulder.

ADAM
Yeah, that’s me. And you are?

ADAM
(cooly)
So, Natalie, Natalie Lipka, I was wondering, wanna be in my next music video?

I have the strangest dreams sometimes. Well it didn’t happen that way, but I did meet him a few years ago. A friend of mine knew him and invited me to a concert that Counting Crows were doing at the Ford Amphitheatre. It was magical. She said my face looked like a kid’s on Christmas morning. It was truly an amazing gift.

My role as a musician was short lived. As I mentioned in my blog about caring for your acting instrument, I once attempted to play the trumpet. I soon realized that I couldn’t read sheet music to save my life. I was great at whole and half notes, with some quarter and eighth notes. Anything beyond that I considered work best handled by a professional. Once I realized the trumpet didn’t “work” for me, I tried the bass guitar. Mainly because I thought it looked cool. I played the “role” of a female bass guitarist well, but didn’t actually play the music. I realized that the bass clef was even harder to decipher than the treble! All I knew was that I loved music.

I love going to watch indie bands. I had friends in bands in high school and college and I was always their number one groupie, because I found their courage to create so motivating. That is the main reason why we feature bands on Hollywood Close-Up; they are the epitome of creating your own career. They aren’t sitting around waiting for the phone to ring. They are hustling, rehearsing, playing gigs, etc. They are an inspiration and I love all of them for different reasons. I’d like to give a shout to all the bands from our past 122 episodes!

Do you have a favorite band you’d like to hear featured on Hollywood Close-Up?

What Boston Sports can teach us about being an actor. Ep74 – Toni Basil