Preparation is the Key 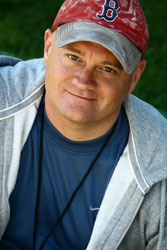 I grew up in a small town called Franklin, Mass., where the winters could be quite harsh at times. It was nothing as bad as the bashing New England got this year, but cold is cold. I love the snow and remember sledding and having some massive snowball battles in the old neighborhood. Snow days were the best. But as much fun as it was, I honestly couldn’t wait for my favorite time of year in Massachusetts – Spring.

Around March you could sense the excitement. The smell of a fresh new beginning, birds chirping, the last remnants of snow thawing at a rapid pace and BASEBALL! Time to meet new people, play to the best of my ability and win the Little League championship.

Baseball helped me become a better actor. It was a pre-cursor of things to come as I utilized skills as an athlete to help me form my skills as an actor. As I mentioned in my blog “What Boston Sports can teach us about being an actor” being involved in sports can be very impactful in pushing your career (no matter what you do) to an exhilarated level.

Preparation is the key. I distinctly remember try-outs for Little League were held early Saturday mornings in March. The air was still cool (often you could still see your breath), the dew was still fresh and the feeling of a baseball hitting the leather mitt stung hard. It didn’t matter, I was about to embark on a brand new season playing my favorite game. It’s funny because auditioning for a role often reminds me of trying out for Little League. You have to practice, practice, practice. If you go cold into an audition without knowing what choices to make, 99 percent of the time you are going home without the part. Same goes for baseball. If you don’t practice throwing, batting and catching, you don’t get to play.

Cultivate other skills. Baseball as a whole taught me so many lessons. I remember I was a year behind most of the kids in Little League. Two weeks before the prior year’s try-outs (should have been my rookie year in baseball), I had an accident and broke my arm in two places. It was devastating for me because I couldn’t play ball until the next season. This put me in a “foul mood” for most of that summer. It was my left arm, so I couldn’t practice catching. I was now a year behind, and not being the tallest guy compared to my classmates didn’t help matters. Everything at the ripe age of 6 seemed hopeless. How was I going to catch up to everyone else?

But my parents (God rest their souls) Carole and Kenneth didn’t let me quit. I grew up in a house with a very positive and winning attitude. My mom was so supportive and I know in my heart she was as crushed as I was when I couldn’t play that year. But, I was constantly reminded if you want something bad enough you will find a way. I gained strength physically and mentally as my arm started its healing process. I literally used that brick wall to my advantage. Using a tennis ball I threw it over and over again against the side of my house and caught it with the same hand. I was practicing a part of the game with a broken arm. Eventually, the cast came off, and though I had missed an entire spring of Little League, I had to prove no obstacle would stop me. I firmly believe things happen for a reason. I played harder, I studied the game more closely and it payed off. That year I batted over .400 and we won the championship for our division.

Perseverance matters. I’m an actor, not a ball player. Whether you grew up playing baseball, soccer, tennis, etc., a lot of life lessons can be learned. You learn skills by doing! Obstacles are a part of the game and it is up to you to be strong enough to overcome them. No matter what your age, hiking or speed walking, softball or golf. It takes effort, practice and a mindset that you must prepare yourself to be elite. Acting is like Little League. If you pledge yourself to learning the basics, continue to polish your game great things are bound to come your way!