The end of an age: Goodnight, Mr. Letterman 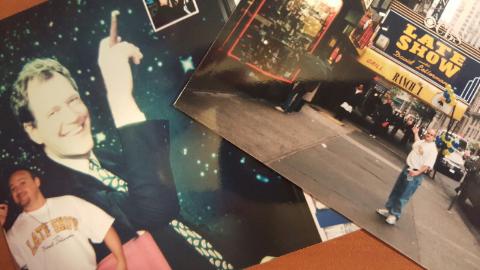 All good things must come to an end. In my lifetime I have seen many TV shows come and go. Some have left an impressive mark, (M*A*S*H*, Friends, Cheers), while others not so. All iconic programs have a full beginning, middle and end. To date, there have been two particular finales that have given me that sinking feeling in the pit of my stomach. The loss of these shows has left a void in my everyday routine. Those two programs were “The Tonight Show” with Johnny Carson and “The Late Show” with David Letterman.

On May 22, 1992, the king of late night himself, Johnny Carson, bid a heartfelt and teary end to his reign as host after 30 years. Johnny was the “go to” in late night TV and my parents (God rest their souls) used to let me watch the first 30 minutes every school night while I was growing up. More often than not I would quietly turn on the television in my room and finish “The Tonight Show,” and then as much of Dave’s show as I could. I honestly think my mom knew, because getting me up early for the school bus was always such a daunting task. But she seemed to understand that my desire to pursue a career in the entertainment business made watching these late night heroes even more important to me. And as a result, I think that helped her bend the bedtime rules.

Saying goodbye has never come easy for me. As mentioned at the beginning of my blog, shows like M*A*S*H* and Cheers wrapped things up nicely and that was that. It is a different kind of series finale when talking about David Letterman. He was a “character” like no one has ever seen on TV. He made us laugh, and think. David Letterman had smarts and charisma that he brought to every single episode. He brought out information about his guests that other talk show hosts often failed to. Letterman was also an innovator, forever changing late night viewing formats by adding comedic sketches, videos and segments like the Top Ten list. This set a precedent for hosts like Jimmy Kimmel, Craig Ferguson and Jimmy Fallon.

Some amazing stats: “Late Night” with David Letterman on NBC first aired Feb. 1, 1982, and then, after almost a dozen years they moved it in 1993 to CBS. The name changed and location changed: “Late Night” became “The Late Show” and the location became The Ed Sullivan Theater in New York City. But Dave didn’t change a bit. He just continued to make us laugh. He also became an important part of both New York and American culture as we know it. David Letterman was the first late night host to come back on air after the 9/11 attacks, as he helped America piece parts of their life back together. The show was nominated 72 times for an Emmy Award, and won nine of those nominations. With over 6,000 episodes and over 15,000 guests, the show continued for 33 years until Wednesday’s final show.

Top 10 Things we will never forget.

10. Dropping things off the roof of buildings (my personal favorite was the exploding watermelons).
9. The human velcro suit (probably the turning point for me, I never laughed so hard).
8. The Alka Seltzer suit.
7. Larry “Bud” Melman (he is the nicest guy — it was great to meet him!)
6. Bill Murray, Tom Hanks, Julia Roberts, Howard Stern, Steve Martin and Johnny Carson. (I could go on)
5. The animal segments with expert Jack Hanna.
4. Drew Barrymore flashing Dave.
3. The Andy Kauffman debacle.
2. Paul Shaffer and the CBS Orchestra.
1. The Top Ten list.

I went to New York in 1998 and saw a taping. A friend of mine won tickets all expenses paid and brought me as her guest. It was a dream come true. I will never forget the awe and wonder as I walked into the Ed Sullivan Theater and experienced the “Late Show” first hand. We met Larry “Bud” Melman, enjoyed free hors d’oeuvres and cocktails, stayed in the Ritz Carlton and had the time of our lives. But perhaps the most memorable thing is that we were treated with kindness and respect for the whole trip.

So in my world David Letterman is a hero. A humble comedian who wasn’t happy unless he was making us laugh. Thank you Mr. Letterman for the laughs, some tears and 33 amazing years!