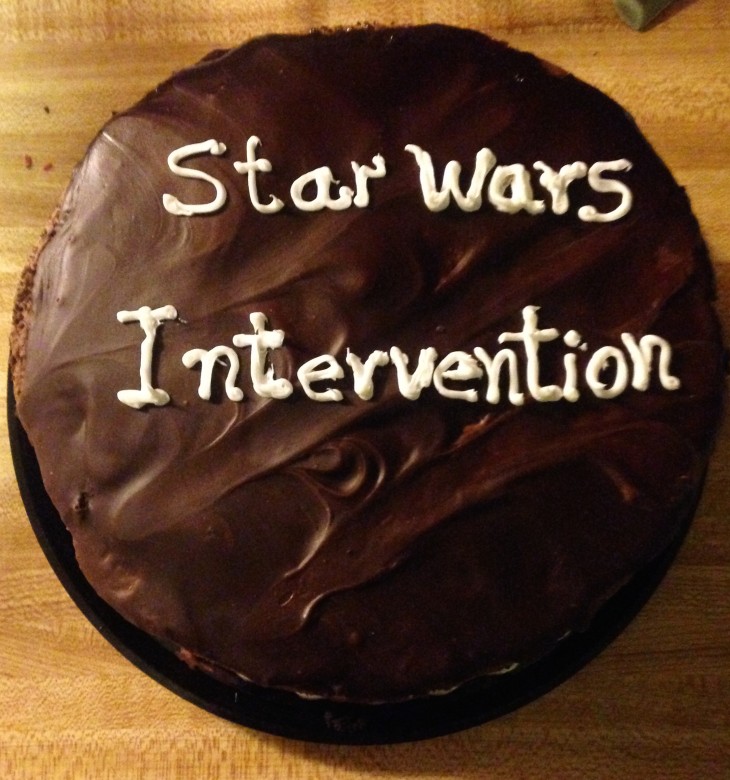 When I first revealed to the world on The Movie Guys Showcast that I had never seen Star Wars, two time Hollywood Close-Up guest Paul Preston of The Movie Guys very quickly put me in “movie jail.” He would not accept any excuses for why I had not yet seen it. Honestly, I thought my viewing of The Phantom Edit was all I needed to see of the Star Wars saga. But alas, according to just about everyone I know, I needed to see Episode IV, the original.

I am happy to announce that I FINALLY broke out of movie jail! I have officially watched Star Wars: A New Hope – start to finish – without falling asleep, might I add. I will admit, I did not do this on my own. It takes a village, or in my case an intervention by my best friends.

The Surprise
My buddy and co-host Wayne Frazier had invited my husband and me over to watch the Red Sox game a few weeks ago. I thought nothing of this until I checked what time the game was supposed to start and learned that there was no game that night. Since Wayne is a huge Red Sox fan, I figured he must know if they were playing. But for a moment, I did wonder what was going on. It wasn’t my birthday. What could he be up to? I didn’t think too long about it and finally just decided that there must be a game. So I showed up at 7 p.m., as requested, walked in the door and was greeted by not only some of my best friends (including my BFF from New Jersey on Skype with hair done in Princess Leia buns), but also a huge Intervention sign (ala “How I Met Your Mother” style) with the title Star Wars under it. The much needed day had come. I was going to watch Star Wars!

Chewbacca be ready for Han amazing time we couldn’t let you do Solo. – Daniel Burress

I love themed parties! This one had it all, complete with Star Wars plates and napkins, drinks such as the “Han Shot,” delicious “Death Star” Meatloaf and there was even a Star Wars cake – it was amazing. I learned that this was a much-needed intervention for my dear friend Katy who had also never seen the movie. It was good to feel that I was not alone! Everyone even wrote and read intervention narratives – this party, I mean intervention, couldn’t have been more thought out.

I realize what was so important for all of us was “the experience” of the first time we watched Star Wars and the wonder the film and the experience brought us. So Wayne and I wanted to create an amazing experience for you… – Danielle Cintron

I wouldn’t have wanted it any other way. The film started and I could feel the magical energy from everyone in the room who had seen this movie numerous times before. I finally understood how this film could be so important to Wayne. To get a better understanding of how Wayne feels about Star Wars, check out his blog. To be honest, sci-fi/fantasy movies are not really my thing, but Star Wars is more than that. I truly enjoyed the film and am glad that I waited so long to experience it with people who are so dear to my heart and who hold Star Wars so dear to theirs.

What is your first Star Wars memory?